ODE TO THE MEN AT THAT DEMONSTRATION 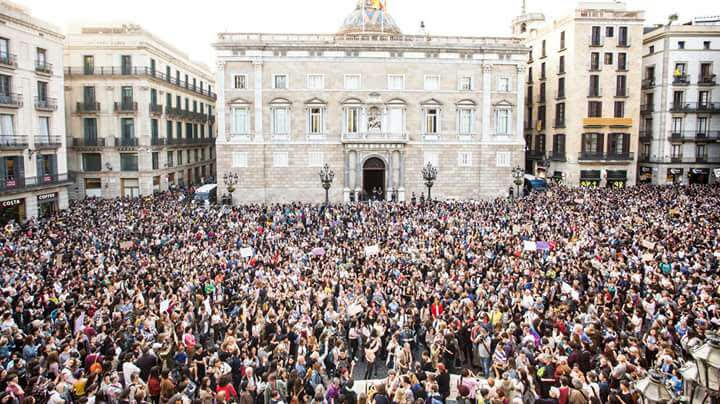 In these days turned gloomy by the shadow of an infamous sentence that downgrades a savage rape by five thirty-year-old men on an eighteen-year-old girl during Pamplona’s San Fermín bull-running festival to sexual abuse, I would like to instill some hope by describing what I lived during the demonstration after the verdict.

As a result of a wave of outrage, people took to the streets in the hours following the reading of the sentence. I joined them with my twelve-year-old daughter, because every cell of my body was screaming NO, I don’t accept it, I don’t want to be considered as an object and I don’t want my daughter’s future sullied by this.

When I got to town square I surprisingly realized that outrage was not the only emotion that pervaded the crowd. The feeling of union, solidarity and mutual support was almost palpable. There, among thousands of people who shouted slogans, raised posters and rattled keys and pots, I had a look to the people around me and I was pleasantly surprised by the presence of so many men! Martina believes that they were almost half of us and I agree with her, even though I do not have official numbers.

The good news here is that these men were there to shout with women that the “wolf pack” does not represent them, that the judge who voted for full acquittal of the five members does not represent them, that they do not want their partners, friends, mothers, sisters and daughters to be treated as objects. They were there to say that something is finally moving in our society, that an increasingly larger part of the male world is becoming aware of the fact that a rape has nothing to do with sex, it’s an instrument of submission. They were there to say NO, with all the women.

This new consciousness cheered me up and turned my frustration into hope. Although sexism is still strong in high places and among ordinary people, those men at the demonstration shouted that something is finally changing, that they are aware and they care.

An image among all is still stuck in my mind as a symbol of this evolution: a father with his two-year-old daughter on the shoulders singing “El carrer serà sempre feminista!” (Demonstrators will always be feminist!). My hope is that the day will come when there will no longer be feminist, minority groups or race struggles because that day will only be about human rights. Equal. For all of us.