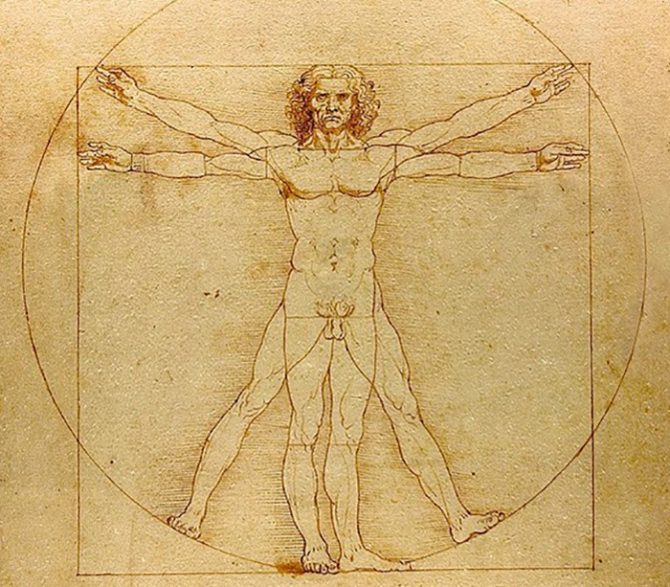 During a Reiki session I normally have to deal with several physical, psychological and emotional problems that the patients can’t see or solve on their own. I work a bit like a mechanic: I find the problem, clean a little here and there, fix something and I finally let the patient’s body and soul solve the situation.

Nevertheless, this time I was lucky enough to give a session to a friend, another reiki therapist, who, at that moment, was in a complete state of grace, and I experienced something I was not used to at all. I immediately noticed her peculiar position on the therapy bed: she was totally relaxed with her arms and legs spread like the Vitruvian man. In Leonardo’s original drawing the man is located within a circle, which represents the sky, and a square, which represents the earth. The two perfectly proportioned figures of a man are a symbol of balance between body and spirit.

Under these premises I was not surprised to find a completely different situation from the ones I’m used to: no energy blockages, no physical pain or contractures, just a feeling of great expansion and peace. The images in my mind were all related to “being in action”. I could see her doing different things in total harmony with herself and her environment: organizing spiritual workshops with different people, managing her family business, dealing with her role as a mother and wife. Everything was developing in total balance, with great joy and no sense of tiredness, it was as if my friend Chiara had a magic wand that made her transform everything she touched.

My surprise disappeared when I realized that the reason for that perfect balance was the lack of fear. Chiara had decided not to call into question anything she did, even if she had not tried before, even if she was not qualified to do it. If she had to make artistic objects for the village festival, she did it, if she had to paint pictures, she did it, if she had to take up needlework, she did it. She wouldn’t refuse any activity: if she felt like doing it, she would. It was a bit like the Nike slogan “Just do it”, she wouldn’t doubt her ability, she would just act and wouldn’t judge the result afterwards.

The effect of this attitude on her is the one I described at the beginning of this article: a sense of union with heaven and earth, between her physical body and her soul, which is the maximum expression of well-being.

That Reiki session was a great lesson for me, because it is very different to say that we have to believe in ourselves to actually see the effects of self-confidence on our spirit and the reality that surrounds us. Therefore, I decided that, from now on, I will do everything I want to without judging myself, and I am sure that I will do everything well, not perfectly, but well, because I’m not scared.